- To show basic phenomena of static electricity: production of and interaction between charges. 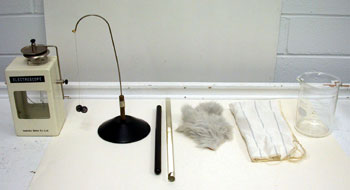 When a glass rod is rubbed with silk, the resulting charge on the rod is positive. However, it is sometimes difficult to achieve much of a net positive on the glass rod. Two much more effective ways are:

When an ebonite rod is rubbed with cat's fur the resulting charge on the rod is negative.

The two opposite charges produced are illustrated by using pith balls on stand or an electroscope.