- To demonstrate that a material's density is defined as its mass per unit volume. 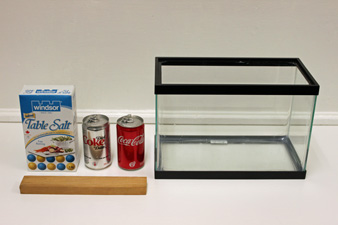 Fill the aquarium almost to the top with water. Place a can of regular soda into the water. Make sure that no air bubbles are trapped under the can when you place it in the water. Does it sink or float? Repeat the experiment with a can of diet soda. Does it sink or float? The cans of soda have exactly the same volume, or size. But their density differs due to what is dissolved in the soda.

Mix in some salt with the water. Place the cans of soda in the salt water solution. Add enough salt to the water until they both float. Salt water is more dense than regular water. It means that there is more mass in a certain volume of the salt water than there is in the same volume of normal water.

When you add table salt (sodium chloride, NaCl) to water, the salt dissolves into ions, Na+ and Cl-. The volume increases by a small factor, but the mass increases by a bigger factor. There are two reasons. One is simply that the NaCl is much denser than water to begin with, mainly because its ions have more mass than the oxygen and hydrogen atoms in the water molecules.

Also, the ions bind nicely with the water molecules, so that the volume of the saltwater isn't as big as the water volume plus the salt volume.