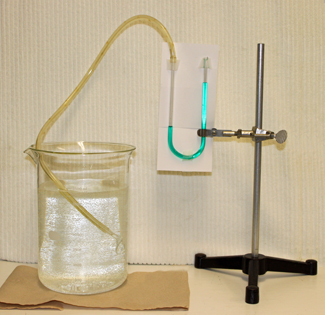 The funnel (open-end down) is lowered slowly into the water to show that pressure varies directly as depth. The funnel may then be turned sideways to show that the pressure at that depth is the same in all directions.

The bulb of the funnel may be filled with water and the funnel raised so that the water level in the funnel is above that in the beaker. A partial vacuum is thus formed, as is indicated by the manometer.

Watch a Pressure in Liquids video demonstration on Youtube