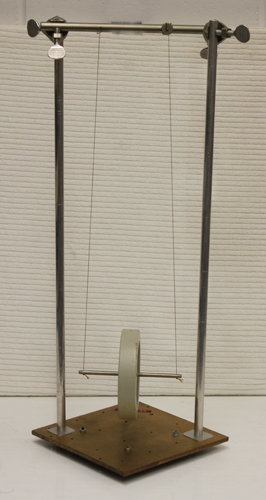 The wheel is approximately 130 mm in diameter and has a mass of 428 grams. It is fitted on an axel protruding 60 mm on each side. The diameter of the axel is 6 mm. Moreover the axel is bored at each end and suspended by approximately 45 cm long strings. One of the two suspension points can be adjusted by means of a knurled-head screw.

- If it intended merely to demonstrate the conservation of energy and not the forces of inertia, it suffices simply to set up the apparatus on it's stand without the balance. In order that the wheel can move up and down a number of times it is important that the axel is suspended exactly horizontal and that the strings are wound on uniformly.

- To demonstrate the forces acting on the strings and the wheel, the assembly, as described above should, be placed on an electronic balance. An obvious but important point to note is that the balance reading equals the sum of the stand mass and "force" exerted by the pair of strings on the wheel and axel.

Record the balance reading for the system at rest. Now set the system into its "yo-yo" motion. Note the new balance reading. The new reading is equal for both upward and downward motion because both the linear and angular accelerations are constant in magnitude for both directions of motion (velocity).

This new reading is about 1.6 g less than the static reading. This 1.6 g difference is the decrease in upward "force" exerted by the string on the axel during the acceration of the wheel and axel. The difference is small because because the accelerations are low (wheel has a large I and the torque on the axel is small).

Sample data for the system as presently configured: