- To show how angular velocity (RPM) can be measured using a stroboscope.

- To show artifacts associated with the above. 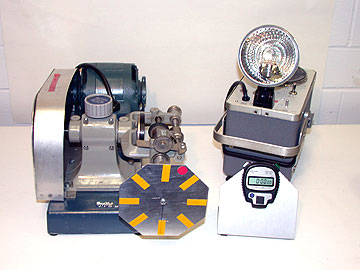 A suggested angular velocity setting for the Cenco rotator is about 360 RPM. To achieve this velocity, set the driven wheel about 7mm from the center of the drive wheel. Place the stroboscope between about 0.5m and 1m from the octagonal disk.

Select the 110-690 RPM range on the stroboscope. Turn on the stroboscope and the rotator. Adjust the stroboscope until the spokes appear stationary. The red "dot" will also show as a single fixed image. A slight increase or decrease in the strobe setting will show an apparent slow rotation of the disk in the reverse or true direction of rotation.

The stroboscope calibration does not does not track exactly throughout the full range so expect some error in the measurement of multiple frequencies.